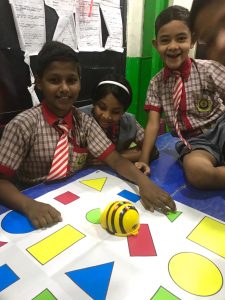 Bee Bot Robot Week  – the children were totally in awe of our little Bee Bot this week! This was their first introduction to programming the little bee and so we started very slowly at the very beginning – allowing the children to ‘tinker’ with the bot, seeing what it can do and what happens when the buttons are pressed. One of our tutors used a ‘fakebot’ – a paper robot to familiarise the children with the concept of moving it forwards and backwards in order to reach an object. Then as they closed their eyes, she quickly switched it for the real thing…now that’s MAGIC!! Some of the comments from the children: “I want the bee to fly”, “It’s swirling like a ballerina”, “What movie is it from?” “Honey bee eating honey around”. One group discussed the gender of the Bee Bot. One girl was adamant it was a boy as it had no hair! Bee Bot lessons continue in Week 8 and also next term. (Photo taken in Dharavi, Mumbai, when I was introducing the Bee Bot to the children in a local primary school).

« Cut Out Collages » Build A Bridge!